Well we’re in the midst of another MWC. The largest mobile event on the planet.  And, once again, many of the manufacturers that we love (though in some cases, not so much), have given us reasons to be excited, criticize, judge, jump for joy or be let down. This annual event is the one that most of us geeks look forward to with great anticipation. Technically, it officially began on March 2nd, but the biggest revelations, as expected, were on Sunday, March 1st. So, who has brought what this year? This will in no way be comprehensive, since MWC 2015 continues as I write this but, hopefully, I’ll give you some of the newsworthy highlights.

HTC started things off this year with the HTC One M9.  Software and internals is what makes this year’s flagship different. But some did complain about how little change there was ascetically from the M8. But, HTC seemed to not want to mess with success, when it came to build quality, so they kept the overall look and feel, just tweaking a bit. The M9 is said to be very snappy with 3 GB of ram built on the new Snapdragon 810 processor. The folks doing hands-on presentations say that it loads apps and web pages very smoothly with little to no stutter. HTC did try to respond to the complaints about last year’s camera by giving us a new camera on the back, but there is already some criticism that they have not yet got it right. Even though they dropped the 4 MP UltraPixel from the back of the M8 (now the front camera has a wide angle lens with the UltraPixel for selfies) in favor of the 20 MP sensor on the M9. The new Sense 7 UI seems to please many and HTC has included a theming app that makes changing the overall appearance of the phone much easier. With other minor changes, the jury seems to still be out concerning the M9. We’ll have to wait for full reviews before a final judgment.

HTC also brought out their new fitness tracker, “Grip” and followed up with their own stand-alone virtual reality headset, the HTC Vive. Unlike Samsung’s VR, it doesn’t work with your phone, but connects to your computer or other HDMI source. By the way, the much-loved Boom Sound Speakers are still there, since they are one of the big selling features of the phone.

The second big presentation of the day was Samsung’s Unpacked Event revealing the much leaked Galaxy S6 and S6 Edge. Both of which seemed to be generally well received with a smack of skepticism, since the rumors were rife that Samsung would be drastically toning down TouchWiz and building the new phones from the ground up. In reality TouchWiz has been backed off a bit, but it’s still there, though seemingly not slowing down and lagging things as much as in the past. Both phones have an aluminum build, sandwiched between layers of Gorilla Glass 4 front and back. Everyone agrees that they feel very premium with many saying that the Edge is easily the best looking phone that Samsung has ever made. Both have 5.1 inch Quad HD Super AMOLED displays with Samsung’s latest Exynos octa-core chipsets.

But, the talk is that the way Edge’s screen gently curves away on either side makes looking at the screen awesome and that it feels extremely comfortable in the hand. Though the S6 looks attractive, it just appears more mundane next to the Edge. Or so they say. Both are said to run very smooth and fluid. According to Samsung, the Exynos chip gives a 20 percent jump in performance, while cutting down power consumption. Each phone runs Android 5.0 Lollipop. Also, both come in 32, 64 and 128 gig variants since, and here is the upsetting news, there is no removable battery nor SD card.

As for others, Huawei presented their new Android Wear watch, appropriately named the Huawei Watch. It has a very premium, classic timepiece look with a sapphire crystal screen in a scratch resistant, stainless steel housing and is available in gold, silver and black. A number of bloggers and reviewers have already declared the Huawei Watch the best looking Android Wear watch that’s come along.

LG revealed the much-leaked LG Urbane LTE, a sleek looking, very premium timepiece based on WebOS, not Android Wear.  And yes, it can make a receive phone calls with no phone needed. It will initially be released in Korea and, thus far, we don’t know if it will make it to the US. No pricing info or release date as yet. There is also a non-LTE version, which IS an Android Wear watch. One bit of added functionality is that the LG Urbane can be used as a walkie-talkie with devices on the same cellular network.

YotaPhone has revealed that their newest device the YotaPhone 2 will be coming to the U.S. via the Indiegogo crowd funding site.  If you don’t know the YotaPhone, it is a high-end Android phone with an e-paper display around back that uses no power when static images and graphics are displayed. It will work on T-Moble and AT&T networks with LTE. It will be offered at approximately $600 with incentives to early backers.

Some big news that surprised everyone is that the upcoming Alcatel Hero 2 will be powered by Cyanogen OS. The OnePlus One has been the only well-known phone powered by the OS thus far, but Cyanogen’s management has made it very clear that they mean to grow and would someday like to surpass Google’s OS.  Their thought, not mine.  But, this is obviously a step in the direction that they intend to go.

Sony, since they decided to hold back the launch of the Xperia Z4, brought other, not so disappointing devices to MWC. They revealed the amazingly thin Xperia Z4 Tablet, which seems to have impressed many. With a Retina-like IPS display, it is being called a truly flagship device, worthy of competing with the iPad Air. Sony also presented the Xperia M4 Aqua which, while not a top-of –the line phone, is said to be no slouch with a compliment of features that closely resemble last year’s Xperia Z3, but with IP65 and IP68 ratings. With no physical flaps covering the ports, the phone is capable of surviving submersion in 1.5 meters of water for up to 30 minutes. Hence the Aqua name.

I’ll conclude with Lenovo’s array of offerings. The Lenovo Vibe Shot is a smartphone aimed at camera enthusiasts. With a 16 megapixel main camera with triple-LED flash, optical image stabilization, and manual controls. On board is a 64-bit Snapdragon 615 chipset with 1.7GHz octa-core processor and 3GB of RAM. So, this phone will perform. It comes with Lollipop out of the box and Lenovo’s Vibe UI. Next up is their mid-range A7000 with a 5.5-inch display and a 720p IPS resolution. Lenovo also brought in two new tablets. The Tab 2 A10-70 runs Lollipop with a Mediatek quad-core processor, 2GB of RAM and 16GB of expandable storage. Tab 2 A8 comes with KitKat, again a Mediatek processor with a single gig of RAM and a storage capacity of 8 or 16 gig. What seemed to be the show stealer for Lenovo though is the Lenovo Pocket Projector. A portable projector with dual speakers that can project content from a smartphone wirelessly via DLNA or Miracast. When cordless, users can project a full length movie on a single charge, with more than two hours of battery life.  It seems pretty impressive.

There are still so many products being presented that I couldn’t possibly tell you about them all. Suffice to say the Mobile World Congress 2015 is a great success, as we always expect. Hopefully, we’ll be able to bring you more as it winds down. 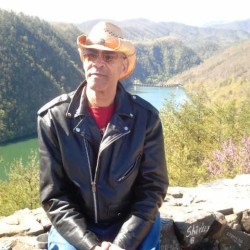 George Hayes
Writer at Bane Tech
Married to my best friend since 1987. We have six grand-children and three great-grandchildren.
Began writing for Bane-Tech August 2014, due to an ever-growing passion for mobile and Android in particular.
Computer programmer 1981 to 2015. Currently retired. Active You Tuber (Mobile Geezer:
Twitter - https://twitter.com/MobileGeezer
Instagram - https://www.instagram.com/mobilegeezer/
Facebook - https://www.facebook.com/MobileGeezer
Google Plus - https://plus.google.com/b/106433550154529693622/?pageId=106433550154529693622).
Sax player and singer in various bands (rock and R&R) since the mid 60's. Avid motorcycle rider (Gold Wing), bicyclist and exercise enthusiast. Extreme lover of driving and biking (motorcycle). The more thousand miles the trip, the happier I am as the driver.
Dedicated, Bible-believing Christian who makes no judgments on others .

Married to my best friend since 1987. We have six grand-children and three great-grandchildren. Began writing for Bane-Tech August 2014, due to an ever-growing passion for mobile and Android in particular. Computer programmer 1981 to 2015. Currently retired. Active You Tuber (Mobile Geezer: Twitter - https://twitter.com/MobileGeezer Instagram - https://www.instagram.com/mobilegeezer/ Facebook - https://www.facebook.com/MobileGeezer Google Plus - https://plus.google.com/b/106433550154529693622/?pageId=106433550154529693622). Sax player and singer in various bands (rock and R&R) since the mid 60's. Avid motorcycle rider (Gold Wing), bicyclist and exercise enthusiast. Extreme lover of driving and biking (motorcycle). The more thousand miles the trip, the happier I am as the driver. Dedicated, Bible-believing Christian who makes no judgments on others .